We did not expect the ferry to be quite the adventure that it was. Early Saturday morning we headed to La Paz, and then right through the city to get to the ferry terminal.  Fortunately the Banjercito there was open, because we needed to purchase a vehicle permit for mainland Mexico and would not be allowed on the ferry without it.  The young clerk spoke little English but was very cheerful and thorough. Our Manitoba vehicle registration lists our address as NW-29-10-20W, that being our legal land description. This causes us issues in Canada, and she was no less confused. After about an hour, that included us having to locate the copy office in the most unlikely of places, she pondered over the documents again. Pointing at the NW she asked, “Is this your street?” I said yes. Pointing at the number 29 she asked, “Is this your house number?”  I said yes. And so now we live at #29 NW Street, and we have the permit to prove it.

Next up was the weigh station for the van which sounds easy but this was not one straight line of vehicles.  There is no room for all the semis trying to get in, get weighed, and get out again so everyone has to jostle back and forth and sideways. After that we had to park and pay for the tickets. The tiny office was already full of truck drivers. There was a half wall of plexi-glass between the clerks and the clients which caused everyone to yell over top of each other just to be heard.  It was crazy loud  and I worried that I could not negotiate our business, in my limited Spanish, over all this noise. But it actually went OK. The van and an overnight cabin for two, with supper, for a 14 hour trip, was $378 Cdn.
We were separated for quite awhile before boarding, Bob in the van and me in the passenger terminal. I was a bit anxious not knowing how Bob was doing, but as soon as I boarded he was there waiting. We were glad we paid for a cabin and although the bed felt like lying on a pool table, it was nice to have our own space and bathroom.

We pulled in to Mazatlan port about 10 AM. Bob went down to drive the van off and again I had an anxious hour not knowing how to find him. I decided to walk out through the terminal and across the parking lot to the street, and hope for the best. When I finally saw him drive around the corner from the ferry, I went running down the street in my flip flops, waving my arms frantically, feeling quite like a mad woman. He saw me.

After a long search through Mazatlán city, we found Fernando’s RV park in the tourist zone just a few blocks from the beach. It had a pool, a reddish tiled outdoor lounge and laundry facilities. There were about 20 RV spots and many of those were there for the winter. In the small street shops we bought bathing suits and sandals. One evening we took one of the golf cart taxis, which speed crazily up and down the hotel strip, to the Malecón.

The water pump for the sink had developed a leak because of an internal crack. We ended up driving to three supermercados looking for something to fix it. We stared at various tubes trying to decide what they were as there is no English on the labels.  Bob bought three different products, and in spite of the lack of directions he managed to fix the pump using a glue called Kola Loka Goterito, and backing that up with Superbarra, which turned out to be a type of epoxy.

Even though it is a city, we felt comfortable in Mazatlán. We found the tourists and locals to be genuinely friendly and happy and we would have liked to stay longer. But after spending 2 nights we headed south again using the free highway 15 and then the tole road 15D for about 4 hours. 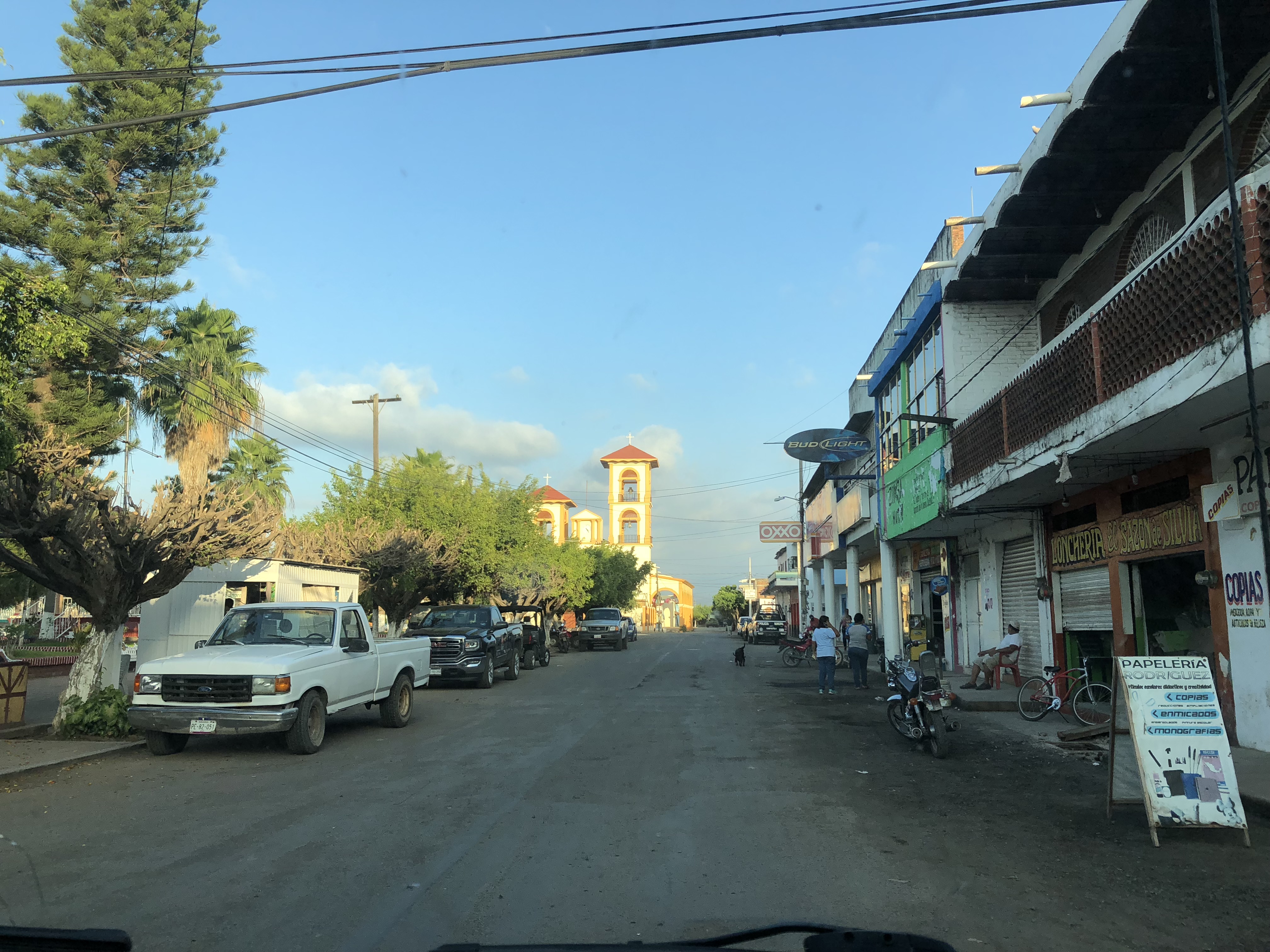 Turning west we took a new highway to the coast. The area is heavily forested with thick deciduous trees and in places the road cut through hills of deep red soil. There were yellow crossing signs for large cats, like the deer crossing signs at home.

Finally we headed south again on the slow coastal road 200 where we found beach camping at Rincón de Guayabitos and then Sayulita.
We loved Sayulita from the moment we arrived. The small town is full of tourists without feeling crowded or busy. Large waves pound the beach, about 3 to 5 seconds apart, breaking near the shore.   From dawn to dusk there was a row of surfers lined up on the water. Most of the thousand other beachers  were enjoying the waves. Standing waist deep, the challenge is to jump up at the right time in order to keep your head above water. If your timing is off, it lifts you up and tumbles you around like a peanut in a blender, filling your suit and crevices with sand. Believe me, this is a lot of fun. 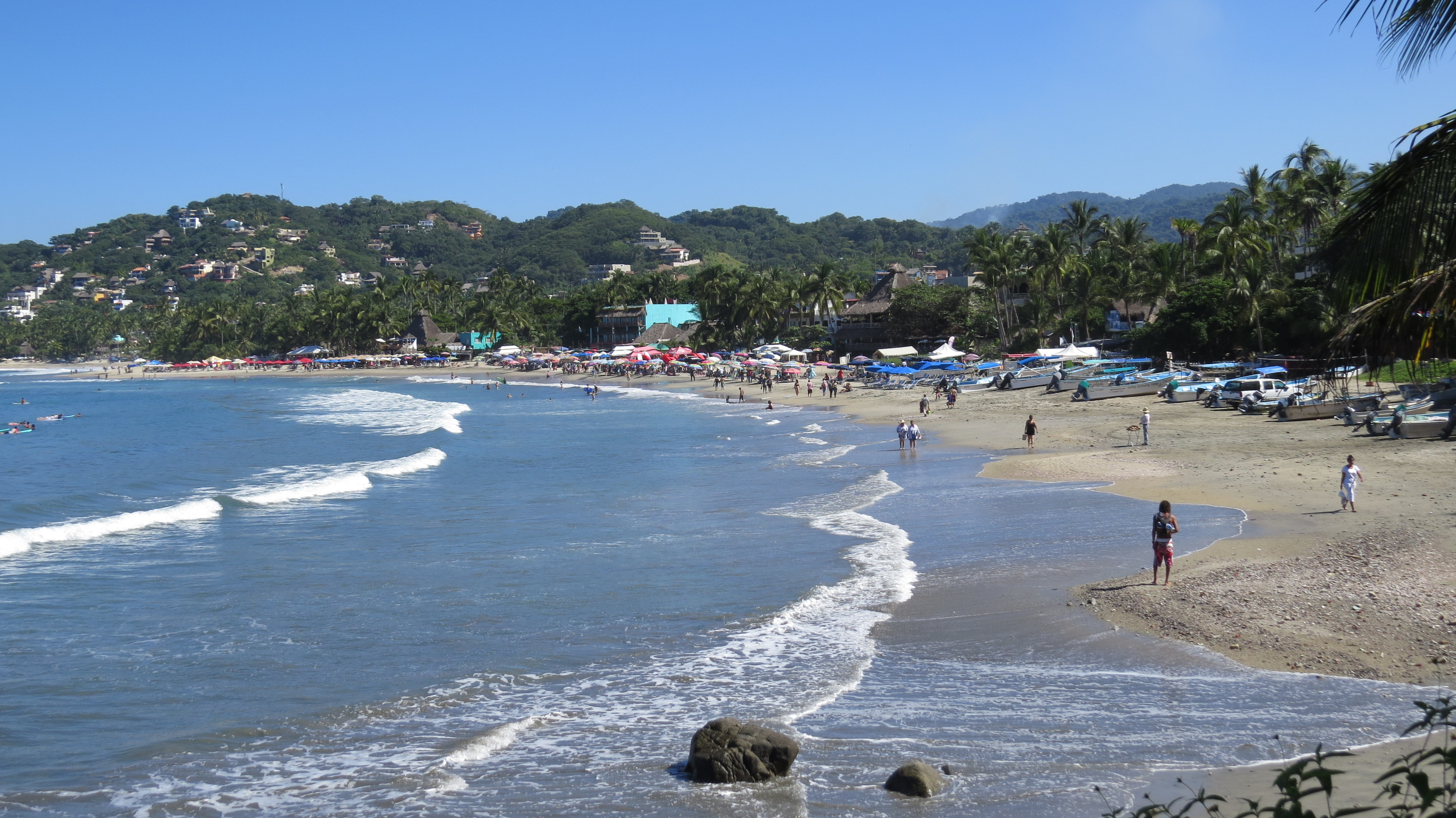 At the campground we met up with Kim and Austin again, a young American couple whom we met on the ferry. They are headed to El Salvador for Christmas in a camperised Toyota Sequoia, carrying a small motor bike on the front bumper, an inflatable kayak in a box on the back bumper, a surfboard and 3 fishing rods. They came prepared for fun and entertained us with stories of their adventures. The morning we said good bye, they had just adopted a Mexican street dog, a tiny Chihuahua that had been hanging out at a taco stand.
We headed south down Highway 200 intending on finding a camp spot on the Bahia de Tenacatita. Driving through Puerta Vallarta, I was taking pictures instead of watching el mapa. One missed turn and we ended up downtown near the waterfront, at a slow crawl, negotiating narrow cobblestone streets. We saw the old shop district and a new shop district and the waterfront and the back end of way too many stinky buses.

We found camping again on the bay near the Puebla of La Manzanilla. You guessed it – lots of sand, sun and palm trees.  This weekend is a 3 day holiday celebrating Revolution Day so we feel lucky to get a good spot. This morning, Saturday, Mexican families started arriving and now the camp is full of tents, tarps, kids and music.  Most often the music is Spanish pop rock but also quite often mariachi is played for hours.  I don’t get the attraction.  People are very friendly and when walking past anyone they greet you with hola or buenas or buenas dias.

The Plan is to head for Mexico City tomorrow with one or two stops along the way.  This will be our first time to leave the relative security of the tourist laden coast. Hasta luego!

One Reply to “Mazatlán and the coast”