Our good friends Krys and Merv arrived in  Chile after a tiring  journey. Having left home at noon on Tuesday, they landed in Puerto Montt at 7 pm on Thursday. Their first flight, out of Winnipeg, was delayed which caused them to miss the next 2 flights. They were forced to reschedule everything using cell phones while sitting at the airport. The joys of travel.

It was great to see them.  Bob and I picked them up at the airport, after changing Vanna back into a travel vehicle for the four of us. The bed returned to seat mode, and the bedding was stuffed behind along with all the luggage, the tools, the lawn chairs, and other assorted bits. It fit.

We decided to spend a few days in Puerto Montt, then head south on the Carretera Austral to Hornopiren, then north on the V69 to Puerto Varas on Lago Llanquihue. A circular route.

For the first few nights, we found a two bedroom cabana right on the ocean just outside of Puerto Montt. Owned by 63 year old Veronica who fussed over us. Two mornings she brought us home made bread, still warm. Great with honey or jam. What a treat.

Ready to head into Puerto Montt one morning, the van wouldn’t start. We called Veronica over, she phoned her husband and then called over the neighbor Edwardo. He arrived with his wife Carolina. A neighbor girl came over too. Wearing a bright pink sweater, she towed a piece of green garden hose that she used as a skipping rope. While the men tested the lights and batteries, and discussed bits of advice, via cellphone, in Spanish, Bob lay under the van and cleaned the contact points. It worked. Vanna fired up. Meanwhile, we women renewed our dormant skipping skills. Skipping with a garden hose. The 7 year old outskipped us of course. But Verónica was pretty good too!

Highlights of our day in the city were a visit to the Diego Rivera art gallery where locals artists show their work, and eating at the Angelo Fish market.  The little restaurant we chose had a family atmosphere, everyone talked to everyone else. It was so small the chef could join in on the conversation.

Before we left the city, a crowd was gathering for a protest in the street. Police were arriving in vans and on motorcycles.  Ya, time to leave.

Driving south on the Carretera Austral, and one ferry ride later, we arrived at Hornopiren.

Here the road ends again, but you can board another ferry, a 5 hour ride to Chaitén where the carretera route  begins  again.  After a bit of searching, we lucked into a cabana with a large loft and a wood stove in the living room. Perfect for the rainy cool weather.

The village is bordered on one side by the ocean and surrounded on three sides by thick green forest rising steeply up the mountainsides. Endless vistas.

One day we boated to an island for a 2 hour soak in the termales pools.

Another day we drove the backroads, finding a half dozen waterfalls, and a few rivers, raging down through lava rock from the snowy volcanoes. The Rio Blanco is an aqua marine blue with a white frothy top. Gorgeous. We watched kayakers and rafters taking a crazy spin through the chutes between the rocks.

Cut out of the lush forest were small farms, sheep or cows grazing in green pasture, or stacks of pink, yellow and blue honey boxes.

An apiarist, Merv was interested in taste testing the honey. We stopped at a farm advertising miel for sale. He and I walked up to the house.

While we waited for some other customers to finish buying,  Merv checked out some of the equipment that was sitting on the deck. Then, in bits and pieces of slow Spanish, the two guys shared notes on their honey production. They had great camaraderie in spite of the language difficulties. Merv’s honey at home is produced from crop flowers, while the honey here is from wild flowers. It is smooth, creamy, delicious. 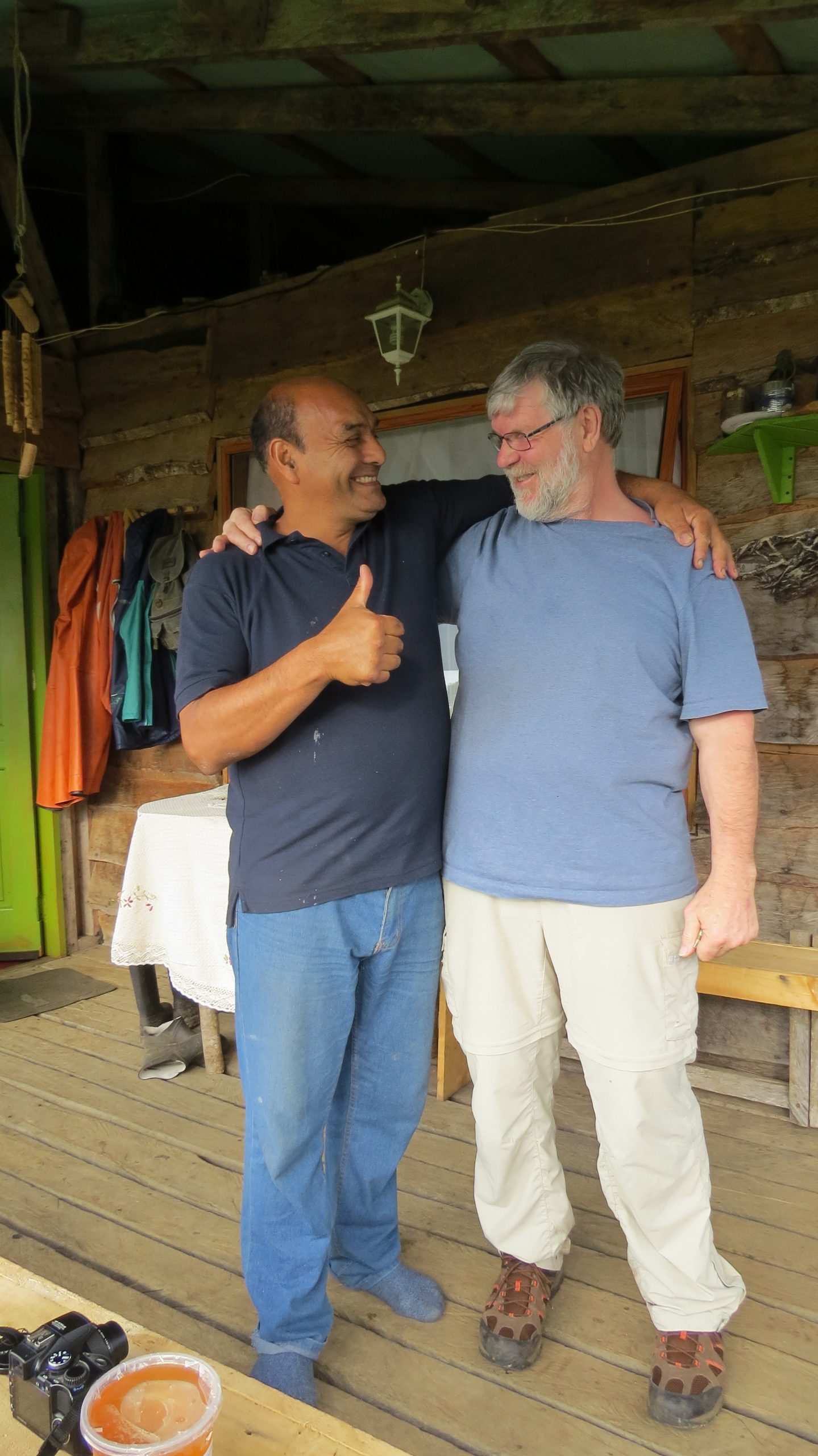 A remote highway, route V69 follows the east side of a long fjord running inland from the Pacific. We headed north on this route intending to get to Puerto Varas in one day. But it took two.

Although it was overcast and rainy, we had many spectacular views of the fjord and the faded blue mountain ridges behind. All along the water were strings of muscle farms with their lines of bobbers, and salmon farming with its rectangular ponds. The air was cool, and in the middle of nowhere, we just happened upon a newly built thermal spa with 6 pools. Who knew? Had to test those out. They provided white towels, and we tried several different temperatures of water.  But after a few hours in the spa, it was too late to drive much further.

There was no accommodation available in the tiny town of Cochamo. Continuing down the road, and after more searching we found a woman who said she had a cabana. She hopped in the van with us and directed us down the road.  It was a tidy two bedroom chalet with wood stove.  Very nice.

Puerto Varas sits on the edge of Lago Llanquihue, the second largest lake in Chile. Towering over the lake on the eastern end is Osorno volcano. Snow covering the conical slopes, it draws many tourists for one perfect stunning photo. Blue water, white snow, massive rock. 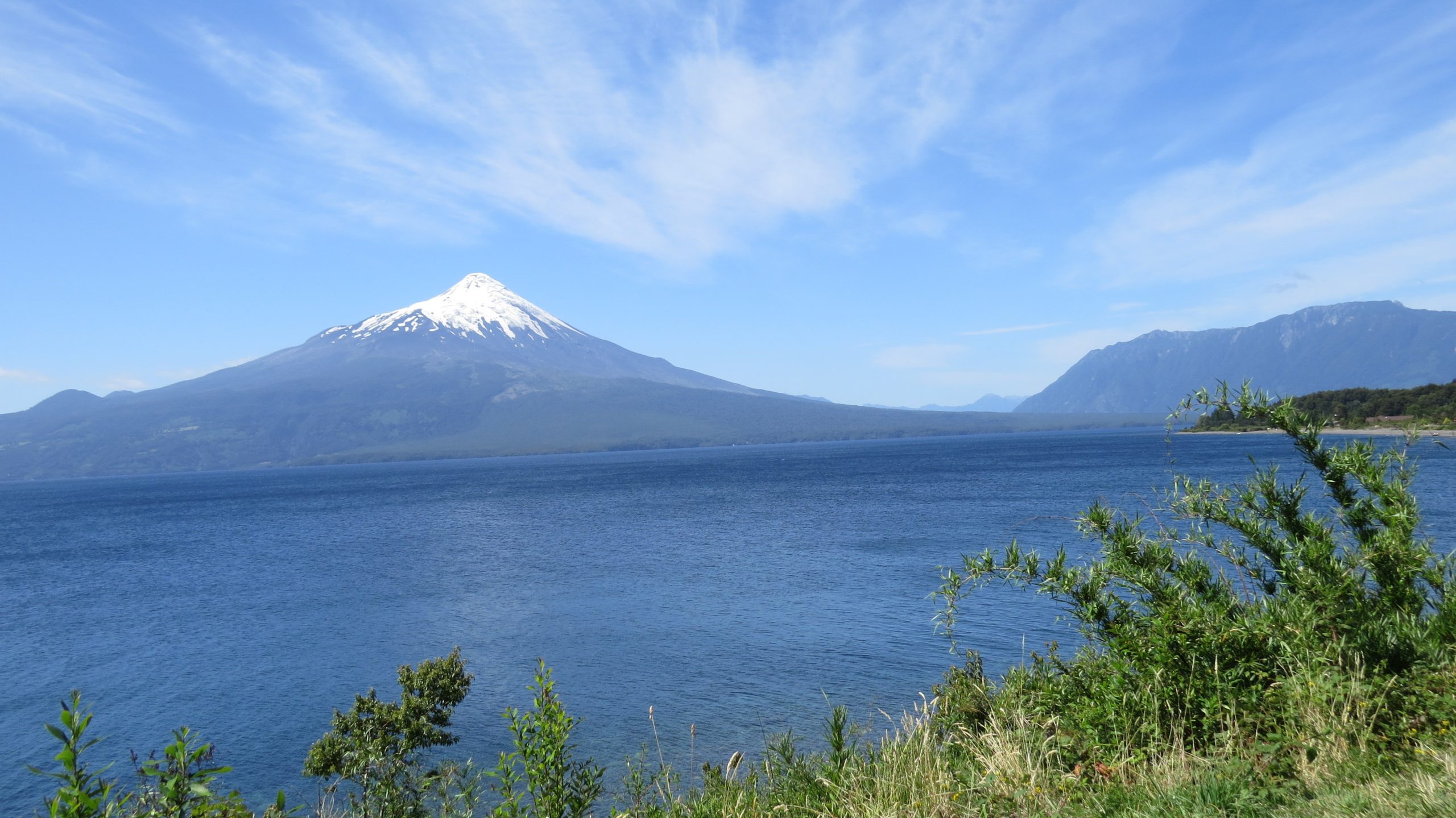 Our intention was to stay in the city, but it was not what we expected.  Everyone from locals to tourists had us believing it was a rustic German village. It is not. More a bustling, high rising, traffic clogging city, with a small stretch of pebbly beach on the lakefront. We bought groceries and left.

Preferring a more tranquil vibe, we drove along the lake to the town of Llanquihue where we found lodging in a second floor apartment. Small but decent enough. We will hang out here and explore.