As soon as we hit the coastal road we started seeing tsunami warning signs. 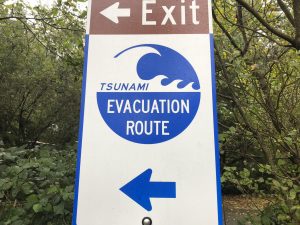 Lots of them.  And we also noticed signs indicating tsunami exit routes, but the roadways they pointed to seemed impossibly narrow.  How would all the cars get up that narrow roadway and not get into a traffic jam?  And then everyone would die sitting in their cars.  In all of our planning we had not prepared for this.  Guess what?  You don’t take your car!  As soon as the alarm is sounded, or the earth stops shaking, whichever comes first, you run for the exit route.  Yes, on foot.  No kidding.  I will need to work on my running.

From British Columbia, we drove down into Washington state on Highway 95, then angled over to the 101 which runs along the Pacific coast.  We stayed on 101 for the entire length of Oregon.  The highway winds and twists, ups and downs,  through heavily forested mountainous terrain, then dips back down to the ocean.  At times you ride the cliff, with the ocean spread out below you.  We stopped often, to take in the view of the ocean, the waves breaking into white froth, and the long sandy desolate beaches.

This route through Oregon has a wayside stop, a lookout or a state park practically every mile.  Even though it is late October, there are still  many campers on the road and the state parks we camped in have been at least half full.

The highway snakes through small seaside towns where the weather worn houses seem to be painted mostly either boat blue, stark white or creamy yellow.  We took a liking to the town of Tillamook, which had a happy kind of vibe, and we spent time exploring various locally produced products.  We purchased yarn for my afghan project at a working fabric museum, cheese at the cream factory where you could watch the whole cheese making in progress, and summer sausage at Debbie D’s, who still uses her father’s recipes.  At least that is what her sister told us.

We were just making the cheese and sausage into our lunch at a wayside park, when Christopher from “Adventures in Happiness” rolled up on his bicycle.

Originally from Scotland, Chris is a happiness researcher, (the first we have ever met) which made for some interesting conversation while we shared our lunch time with him.  He had almost completed one year of bicycling through the Americas, beginning in Argentina.  After reaching Vancouver, he plans to visit Bhutan where, he informed us, “gross national happiness is a goal of the government”.  Interesting.

The Plan  Find the heat in California, and cross into Mexico by next week. Maybe.

4 Replies to “Tsunami anyone?”