On route 25, it is 640 kilometres from Cartagena to the city of Medellin, but it is not an easy drive. In that distance the altitude rises from 100 feet in Cartagena to over 8500 feet before it drops down to Medellin. The road was decently paved with only random holes or bumps to avoid. Having had the fuel pump replaced the van seemed re energized. It was not long though before we experienced car troubles again.

Vanna would slow, of course on a hill, and then stall. It was Saturday and we were in a long line of cars, delivery trucks and semis, moving along at about 30 mph. Each time Bob was able to restart and sometimes then we would sail along without trouble, but then it would slow and hiccup and backfire. On the first day, we stopped at a roadside mechanic shop near the town of Sincelejo. Even though he had other customers, Wilfer the owner was quite obliging. He had a scanner, and google translate, and for the next hour or so he and Bob discussed strategies. They suspected the fuel filter but the only part available did not fit. While I waited in front of the shop, two men brought me a red plastic chair and quizzed me in Spanish about our drive, our van, how we liked Cartagena. They felt a black van was not a good idea in this climate and I fully agreed. In the end, Wilfer cleaned and reinstalled the old filter. Then we were on our way.

Vanna went like a trooper for a few hours, but the problem returned. So we spent 3 anxious days like that, starting and stopping. At first the country side was dry pasture land, and the road was lined with tall trees. Their  thick random sprawling branches, reminded me of the Manitoba maple at home. Once we started the climb, there were no downhills. Just up and more up. At one point the highway ran along a ridge, with mountain going straight up on the right, and blue hued valleys spread wide and deep on the left. Clear mountain water poured off the steep slope above us, and locals had taken advantage of this to capture the water in a series of black pipes and rubber hoses., forming a makeshift roadside car wash. For at least ten miles along the highway, semis were being washed with hoses that spurted water in every direction.

We pulled over, inches from the heavy truck traffic, and a man washed Vanna thoroughly, scrub brushing the tires and even washing the bikes. It was still around 90 degrees at that point and many of the drivers were having a roadside wash themselves. It was tempting.

Each night we parked in a hotel restaurant parking lot. For about $10 they offer a security guard at night and use of the washrooms. In the small town of Valdivia the highway ran below the town, with buildings perched on a cliff above.

Fortunately the place we parked was a flat lookout just off highway. The road into town was so steep that we thought no car could drive it. Even walking it was a chore. When we reached the top, we came out onto a flat wide Main Street, one block long. It was Sunday and people were milling all over the street.

There was a huge old grey Catholic church at one end and a viewing platform at the other. In between were two small grocery stores, a hardware store, carnicería, a few bars and one or two restaurants. People were visiting in front of the shops, seated at collections of plastic chairs and tables.

As we sat for a drink, men beside us were unloading 100 lb bags of washed red potatoes, hoisting the bag on their shoulder and running with it into a store. At one of the small shops we asked to buy mani crema, peanut butter. Everyone in the shop, customers included, were gathered around us trying to figure out what we wanted. Then someone was sent off to another store to look for it. They were all very kind and I think they thought we were a little weird. They tried to accommodate us but there was no peanut butter to be found.

One morning we decided to splurge on breakfast at the outdoor restaurant beside the parking lot. Our plate came with an arepa, like a small cornflour tortilla only thicker and very tasteless, a pad of butter, a large square of fresh cheese, salty but otherwise tasteless, and a small pan bun that was very sweet. I was not sure where to put the butter. The coffee was good.  Bob ordered two fried eggs as well. The waiter asked, “duro or blando”.  We knew duro was hard and Bob does not like hard eggs, but blando sounded inedible. So he got hard eggs. Later we found out that blando means soft. Who could guess that?

The third day we climbed to over 8000 feet. At this height the rugged steep hills were covered with lush neon green grass.

Small herds of black and white dairy cows grazed on the slopes inside neatly fenced pasture. One man sat on a stool, perched on a hill, cheek resting against the cows stomach as he milked and watched the traffic on the roadway. Men wore ponchos, cowboy hats and tall black rubber boots, with machetes and coiled ropes at their sides.

All along the roadside, many pack horses were laden with shiny silver milk cans, delivering to the milk trucks from the trails connecting mountain farms.

As we descended into Medellin, located in a bowl of the Andes Mountains, we were faced with a labyrinth of intertwining roads spewing in all directions. Looking for the access to highway 60, we stood in a parking lot, watching the craziness of the traffic and peering at google map until we thought we had it figured out. Even so we just about missed the last ramp as there were no signs. Navigating is my job but sometimes it seems impossible because intersections are never consistent or predictable. Map apps like google or Garmin are unreliable in and around cities. To add to the dilema, my brain interchanges lefts and rights at random. I say “left” and just as Bob gets in the left lane, I say, “no I meant right”. Ask him if this is frustrating.

We climbed into forested mountains again, on the east side of Medellin.  The van drove fine all day, then tormented us with spluttering for the last mile. 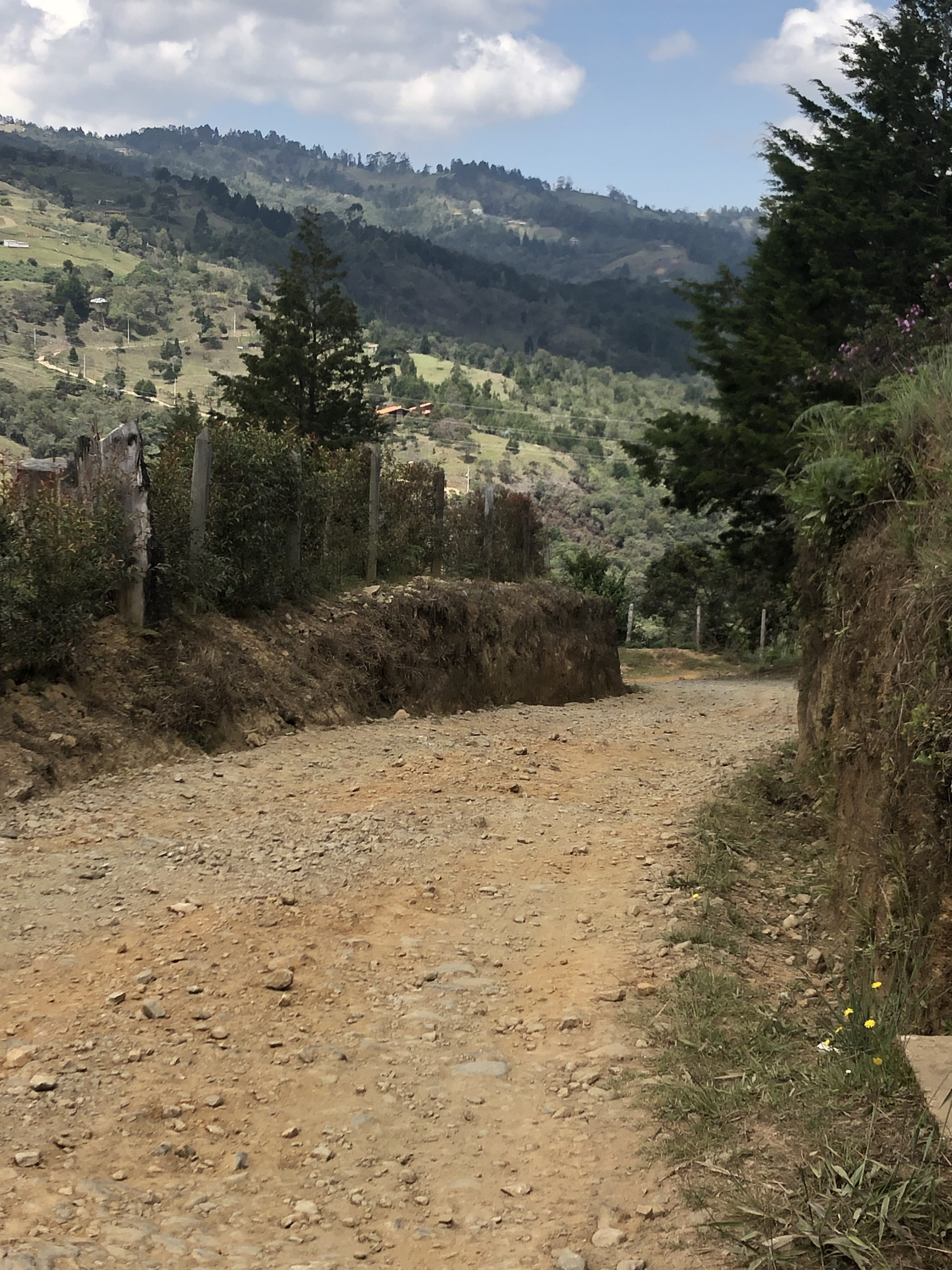 With great relief we arrived and parked on the grass at Al Bosque, a camp for hostelers and Overlanders. It is much cooler here and by about 4:30 we are wearing jeans, jackets and shoes. The camp is set in a pine forest, along a windy paved road that connects tiny mountain villages. Al Bosque has an indoor kitchen for cooking, and a lounge with comfy chairs set in front of a fireplace. Luxurious.

We immediately met an English couple, Sue and Ray, who have been travelling for 4 years, and a Dutch couple Marie and Jarad who have travelled for about 15 years. Both are driving huge motor home diesel units. But ironically they are each waiting for repairs. Sue and Ray hired a mechanic, Edgar, to replace the fuel injectors but so far he only shows up for half a day a week. They have been enduring this agonizingly slow pace for six weeks. Every time they phone Edgar, he says he is coming “tomorrow”, or “not tomorrow”, and either way he doesn’t show. The Dutch couple had a transfer case part sent from Holland and the part is now in Bogotá. The problem is that Customs there will not release the part and they won’t say why. So Jarad makes regular visits to Customs in Medellin, speaks with all kinds of officials, and then returns to camp none the wiser.

The Plan Stay in this camp for a week, repair the van, get some rest, and see the sights of Medellin.

4 Replies to “Cartagena to Medellin; driving through Colombia”