There are two routes away from the Colca Canyon. One was back the way we arrived and the other was to continue west on 109, then loop east to get to Arequipa. We had all day to get to the city, and a distance of 260 km. So we decided to continue west and see some new road.  Bad choice.

The road was fine while paved and we enjoyed the expansive views, stopping at an outcropping of rocks where chinchillas ran for cover. Darn, when I got out with the camera they scurried behind the rocks and not even one ear was showing.

As we drove the land turned dry, barren, treeless,  and  people less. For awhile there were no houses, no vehicles, nada. So we were quite surprised when, at an intersection with a sandy track, a man waved us down for a ride. Being the only vehicle around we couldn’t just leave him there. On backroads, this is how locals get around, and who else would pick him up. He climbed in, sat behind us in one of our lawn chairs and fell asleep. But not for long. The road turned to nasty rough washboard. Bob slowed to a crawl but the van shook and rocked like crazy.  Nearly falling out of the chair, hitchhiker was now awake.

He told us he was mining, but when quizzed about the material, it sounded more like exploration. (Later we learned that Peru is a global player in copper, gold and silver). So that explained all the off road trails that we could see in the sand, they were mining tracks. Occasionally a Toyota Hilux met us on the road, then we came upon an overturned one. All three of us craned to see what happened. Driving too fast, the washboard had flipped the truck onto its side. The driver was OK and an old truck had stopped to help. So we kept going.

After 5 torturous hours, we thankfully made it to the paved highway, and headed for Arequipa.

Often called the “White City”, we were surprised to find that Arequipa is completely different from Cusco and Puno.

Sunny and warm, everyone was walking about wearing T-shirt’s and jeans. No more wool hats in the morning. By 5 AM it was full daylight and the city was on the move. Streets are wide, sidewalks are clean and some of the tidy shops have brand names that are familiar. The city just had a laid back yet upbeat feel.  I could live here. For awhile.

From our campsite, it was a short walk to the plaza de Armas which was being decorated for Christmas. A nativity scene, a tall fake Christmas tree and red and green banners on the archways. The buildings around the plaza are gorgeous.

They are constructed of Sillar, a volcanic stone so white that it’s hard to take your eyes away. And the doors in the buildings were amazing.  Massively oversized, the stained wood popped against the white walls. Each door was artfully designed, embellished with figurations of unique brass hardware. So many beautiful doors. We took a lot of photos.

Just down the street from the plaza, the Monasterio de Santa Catalina was an excellent tourist stop. Founded in 1580 it was home to cloistered nuns until the 1960s. Separated from the outside world by thick rock walls, the convent had its own streets, courtyards, cathedral and laundry.

Newbie nuns had to spend their first four years in silence. SILENCIO was carved into the stone wall.  Although some nuns were allowed to communicate with outsiders through small barred windows.

You would think nuns would do their own housework, but these nuns had servants. As a pastime, they constructed life size figures sitting around a table, a depiction of the “Last Supper” which is on display. It was well preserved and would have been an enormous amount of work. They might have had sewing machines. And they did needlework.

Bob and I spent a good part of the day there, walking through the streets, exploring every room, which led to more rooms and through more doorways. We were provided with a paper map, and every area had posted descriptions in English and Spanish. It was fascinating.

One morning we walked to Yanahuara, one of the city neighbourhoods, to get a view of Misty the volcano just outside the city.

On our way we searched out a bicycle shop to purchase some brake cables. Shop owner  Yerald was so exited to meet us. We don’t know why. But for the next hour or so he told us all about building trails and bicycle racing at an old ruins site just outside of Arequipa. At 42 he still loves the jumps.

For “pollos” and “chicas”, he looked at me, you can ride around the jump. Then he put a video of the race up on his TV screen for us to watch. Of course he was out in front in the race, and he ended up winning.  Yay Yerald!  It was filmed using a drone, so there were wide views of the ruins – and we enjoyed his enthusiasm.

From Arequipa, it is only a few hours of desert to the coast. Taking a side road we came upon a narrow green valley, a patchwork of fields of fruit trees, grapes and to our surprise, flooded fields of rice. The oasis was miles long.

We stopped to get an oil change at LubePro, a roadside shop in a village. 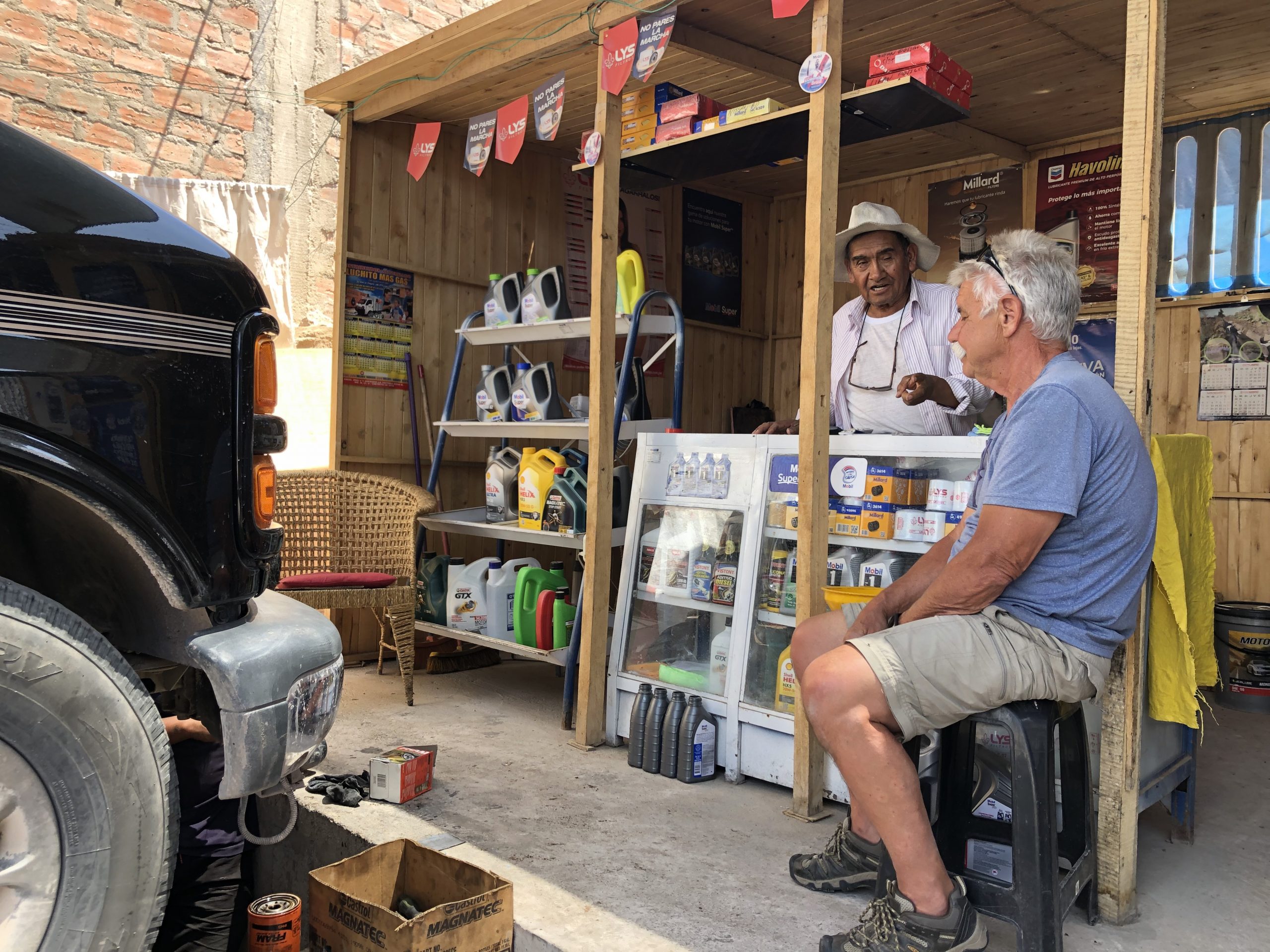 Owned by father and son, the old man talked while his son did the work in the pit. Occasionally poking his head out to add comments. They expressed that both Arequipa and the southern coast, were either too cold, too wet, or too windy. For them life is perfect living in the dusty hot desert sand.  Each to his own.

The Atacama Desert spreads up to 100 km wide, between the west side of the Andes and the coast of southern Peru. Dunes come right down to the Pacific Ocean in places, and in other places leaving enough flat space for a village, a beach and the highway.

The paved road winds around the dunes, sometimes cutting right through, leaving cliffs on each side and exposing the layered interior of a dune. These PeruvIan dunes are made of sand, or gravel, or some of hard rock. Not always picturesque, sometimes downright ugly.

The dunes go on for hours and there is not much else.  Gravel and rock. Heat and wind. I can’t imagine living here.

Arriving at the coast we camped at hotels, first in Camana, and the next night just outside of Mollendo. Both are beach hot spots for weekenders from Arequipa. But the season doesn’t start until closer to Christmas. The hotels  had lovely pools and lounge area, and each night we were the only ones there.

Bob and I had long stretches of beach to ourselves. Except for the birds. The waves were fierce, the water was icy and we only went in to our knees. It was kind of lonely.

The pink flamingos in the briny lagoon were a treat.

6 Replies to “Arequipa and the South Coast, Peru”