Before crossing into Chile, we decided to stay in Tacna, a small city in Peru, close to the border. We booked into the Hotel Royal for two nights. The parking in the lot at the back was a tight squeeze. A young man named Felix, smartly dressed in white shirt and black pants, came out to help us with our bags. We literally walked through the middle of men working on a new addition, past piles of gravel, crossed over mud on a thin plank, through thick dust, past mounds of red bricks, and into a beautiful little hotel. There was one window in our room. It was in the shower. Open to the shower in the next room. High up so you could not see, but you could hear all the bathroom noises from next door. Weird. Price $46 Cdn, breakfast  included.

Exploring Peru is an adventure. You never know what you are going to see, but you know it will be interesting. Tacna did not disappoint. Just outside the hotel was a shop selling anything plastic. An array of coloured dishpans, waste baskets, laundry bins, patio chairs, plastic flowed out of the store and stacked itself in columns along the sidewalk. Every time we went by the owner was unwrapping more bins and cramming more stacks onto the sidewalk. There were old women selling candy, fruit, or bags of jello. Women cook up big pots of the purple or yellow jelly on the sidewalk, then ladle it into individual baggies, or plastic cups. It is a popular evening treat. We didn’t buy.

A concert starring The Beatles, was being announced on a loudspeaker from inside a car that drove around town.  We bought tickets. Start time 8 pm. By 7:30 the line went around the corner. At 8 they opened the doors. Concert started at 9.

Built in the 1800s, the Teatro Municipal theatre had about 200 seats, with long red velvet curtains draping the stage. We sat in row 6 on red plush seats that had long lost their cush.

The three levels of balconies had box seating divided by wood railing. First row in the balcony was wood seats, second row white plastic chairs. In the ceiling we could see faded paintings. When the curtains finally opened we were entertained by Freddy Mercury, in a white stretchy suit with a karaoke microphone, and a Spanish accent.

The Beatles act followed. They were an actual band. Four young guys in suits who had just done a concert in Arequipa. The enthusiastic audience sang to every song. And we danced.

After breakfast on Sunday we packed our bags and headed for the van. But as often happens, we were blocked in. Two vehicles had parked side by side, blocking access to the gate.  Felix came out with keys. He wanted Bob to move the cars. It’s not that easy to drive a car sideways. Inch up, inch back, a little over, do it again. Finally the white car was out of the way. Now the blue truck. If Felix would have backed it out of the garage, let us out, and driven back in, that would have worked. But no way.

So Bob jumped into the truck. But it would not go into reverse. After offering useless advice, Felix ran off to find help. I pushed on the front of the truck. There was a bit of a slope and it rolled back, allowing Bob to maneuver it out of our way. Now those two vehicles blocked all the other parked cars. Not our problem. We were out of there.

The border was about an hours drive, with all documents processed in one spot for both countries. Having researched ahead, we knew there were 7 steps. First, go to the building on the left, up the stairs, walk into the cafeteria, go to the lady at the counter and pay 5 pesos. You just have faith in the directions and hope for the best. Sure enough the grandmother eating her soup at the counter saw me, smiled toothlessly, and drew a form from a pile, holding out her palm for the 5 pesos.

The next two steps were easy. Stamp out of Peru, then stamp into Chile. But the Chilean official is asking for our declaration form. No not the 5 peso one. So where are the declaration forms? How are we supposed to know that the men in the orange vests, standing in the middle of the driving lane, have piles of them. OK, that done. Next was Vanna’s TIP cancellation. Easy.

Next window, Vanna’s TIP for Chile. Well I missed a few parts on the form, and the guy had to finish it for me (darn gringos). Last step, inspection. They confiscated  some of our vegetables, looked into a few bags, and that was it.

Sitting right along the ocean, Arica is the first city you come to in Chile after crossing the western PeruvIan border. It also just happens to be the driest place in the world, except for Antartica. Which makes for good beach weather.

Chile is one of the most prosperous countries in South America and it was a fairly obvious change from Peru. The mall was very modern with a large food court, a Cineplex in the mezzanine, and a Walmart at one end. As at home, people were in line with overloaded carts, and paying with debit cards. Bob got tired of waiting and used the self checkout. We bought new shoes and sandals at the Sketcher store. For the first time in Latin America we saw car wash lineups where you wash your own car. Ah darn, I like watching someone else wash Vanna.

It was Sunday when we arrived. We parked at a long strip of beach just outside of town. There were a few other overlanders and hundreds of locals. Most people bring the whole family, a cooler, an umbrella, and their favourite loud music. The music lasted until 5 AM. Two nights on the beach was enough for us.

From Arica we drove south on Route 5 through the Chilean Atacama. Even though it is desert, the scenery is constantly changing. First dipping in and out of deep canyons, then driving on the wide flat expanse.

Pinks, burgundy’s, greens and whites weave into the taupe brown soil. A ripple of purple ridges run along our right side. Oasis of green trees appear randomly. Found only in northern Chile, the Tamarugo tree takes its water from deep roots, giving it extreme drought tolerance. And thankfully it provides some natural shade.

Over the next few days we stopped to visit three different historical sites.

Not far from Arica, the archeological site of San Muguel de Arapaho has an interesting little museum. Most fascinating was a building full of mummies from the Chinchorro culture. Living from 7000 to 1500 BC, they were fixated on creating detailed mummies from the dead bodies.

Arms and legs were bound in fibres, brains and organs might be removed and replaced with ash or leather or feathers. Faces were covered in masks. And then some were totally dyed red or black. Why? Well, no one knows. But they would place the mummies in the community, to feel their presence even after death.

A short drive off the highway took us to the Geoglifos Cerros Pintados, in the Pampa de Tamarugal National Reserve. More than 420 figures were engraved into the desert rock, around 900 to 1450 AD. Like at Nazca, the geometric, animal and human forms were created by scraping soil away from the hill, exposing the rock underneath. Reasons for the carvings are unknown, although there are several of these sites along an ancient llama caravan route that crossed the desert from the Andes to the Pacific Ocean. 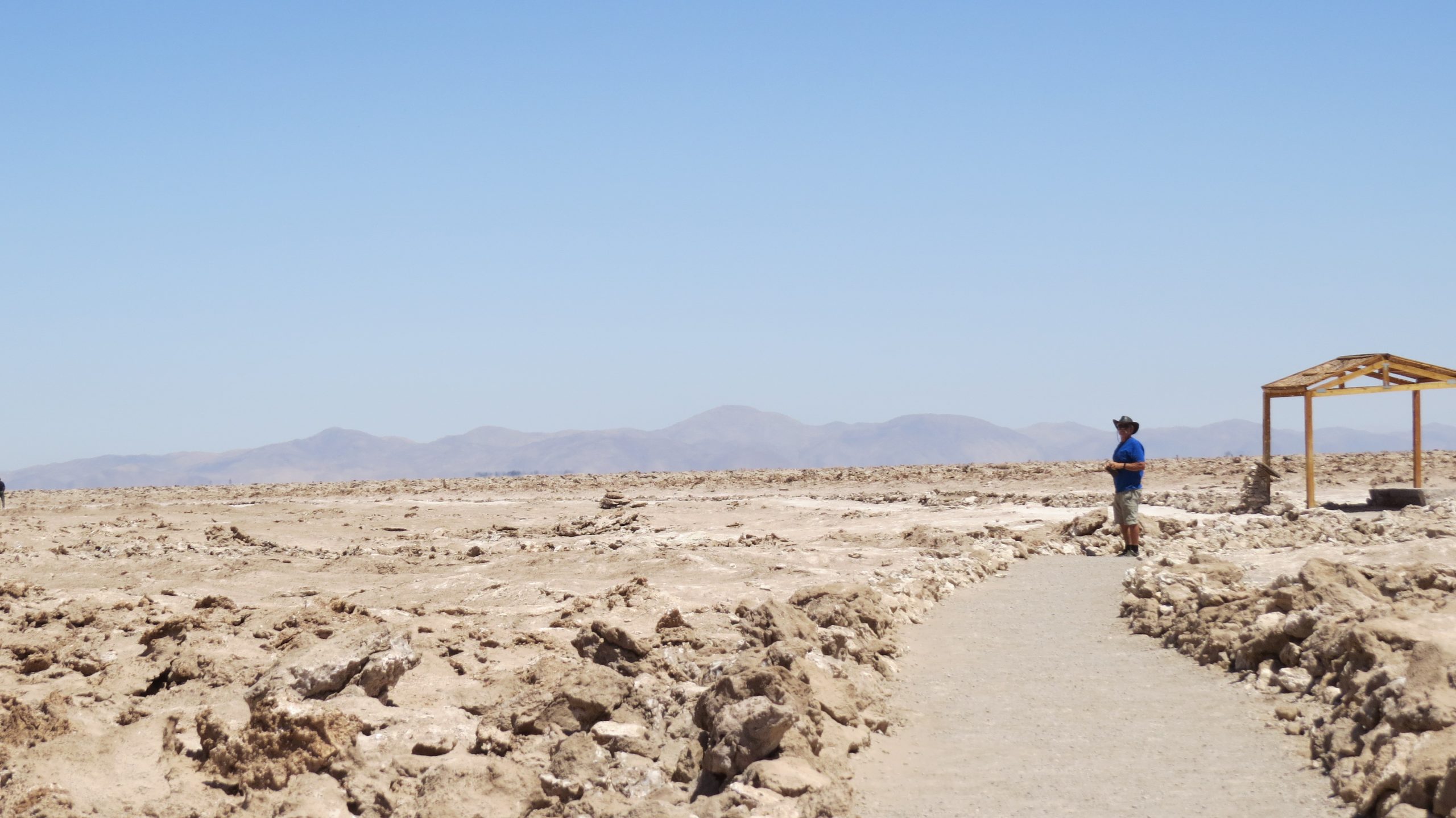 We strolled the kilometre of trail stopping at little palapa stations to read descriptions for each section. Then we stared at the formations on the hillside, trying to figure out which figures they were describing.

Someone with few English skills had done the translations. So for us, the English side was almost as difficult to interpret as reading the Spanish side, adding a level of entertainment. But we could make out llamas, whales and a fisherman.

Another stop was at the village of Humberstone, the site of a saltpeter mine built in the 1800s, and a working site until the 1960’s.  At one time Chile supplied most of the world with sodium nitrate fertilizer. The town site, originally built for workers and their families, has been made into a museum. You can still stroll the streets and enter many of the buildings.

Displays of old tools, a room of handmade toys, classrooms with wooden desks, a bakery, a fabric store, etc. Mineworkers were paid with tickets that they could only use to buy goods in town. They were housed in hot tin boxes while the administrators had houses and a swimming pool.

Chileans like to camp so lucky for us there are lots of camping options, with private, municipal and government run campsites.

You get your own site with a shaded picnic table, a charcoal bbq, an electrical plug, a water tap, and a hanging lightbulb. Sometimes a pool. At one campsite, the kids were having a Christmas pool party. Later Santa, in a fuzzy red suit and white beard, showed up. It was way too hot for that suit. He was probably wishing he could jump in the pool.

From highway 5 we turned east on 24 to Calama where we stocked up on groceries, yes at Walmart. Then we carried on to the small tourist town of San Pedro de Atacama. I think we will stay here for a while.

Wishing everyone a season full of merry and happy!

4 Replies to “Peru to Chile”