San Pedro de Atacama is a village in the Atacama desert of northern Chile. A popular tourist destination for trekking, astronomy and exploring the natural landscapes, the population is around 5,000. Taupe brown adobe walls line dirt streets. The plaza is a hub for artisans, restaurants and of course, the church. 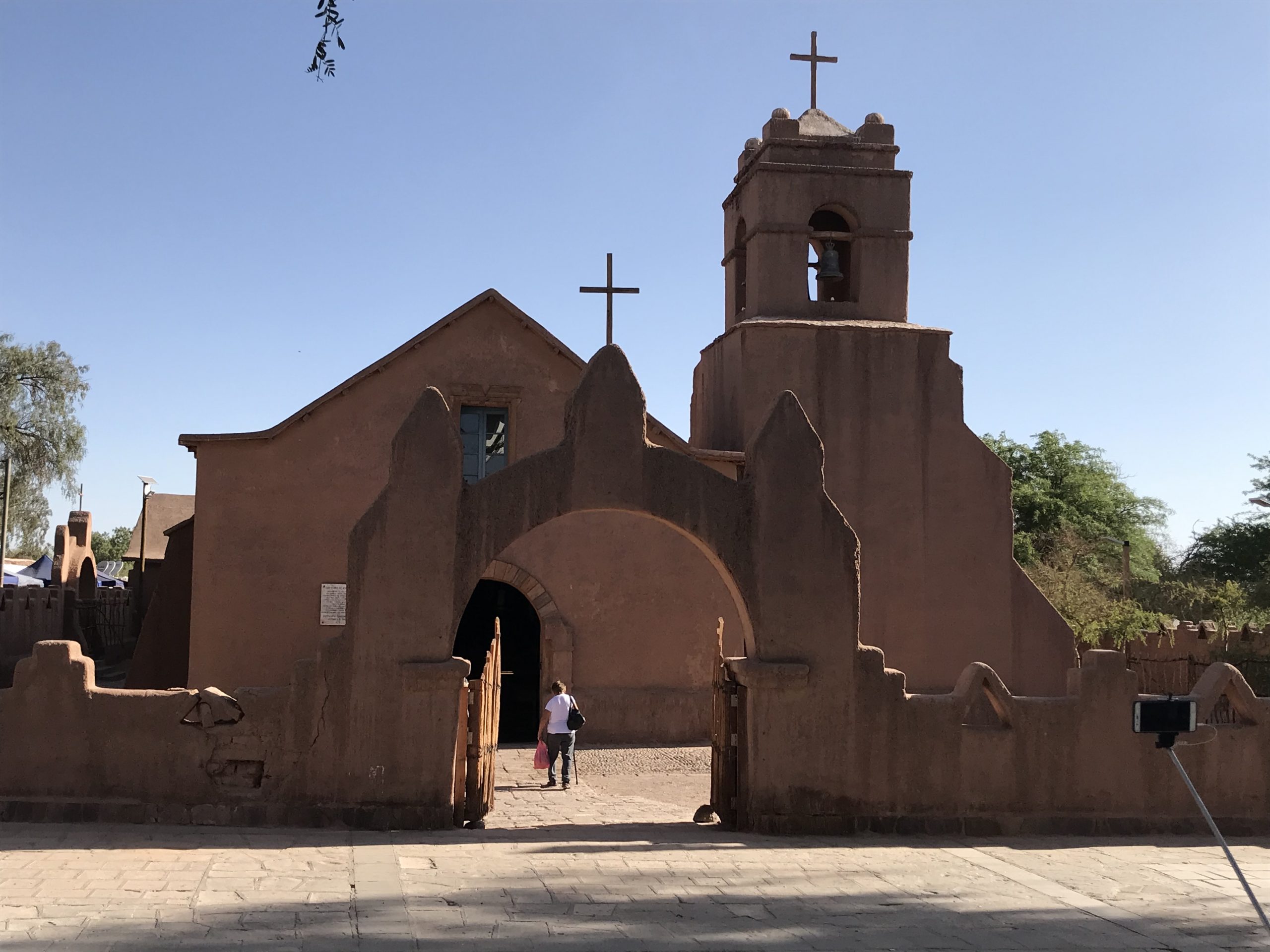 We parked at a hostel campground, and went out to explore. Sitting at the square, we heard a brass band. Down the street came two marching bands. In front of them was a troupe of dancers dressed in traditional clothing, dancing their way out of the adobe church and around the square. The detail in the weaving and beading was incredible.

With a laid back atmosphere, San Pedro’s attraction is that it is surrounded by desert, volcanoes, geysers, salt flats, hot springs and an amazing night sky.

Although we enjoyed the action in town, it was way too hot and windy for us. We retreated to a camp about 10 km south where friends Ray and Sue, two Brits we met last winter in Columbia, were now camped. Located on the edge of the Salar de Atacama, Andes Nomads Camp is an oasis of shady huge old Tamarugo trees, a pool, and a washing machine.

Mornings were cool enough for a bicycle ride. We dusted the crud off of the old blue bikes and took them out for a spin. Flat dirt tracks meander through the desert, taking us past sparse farmyards, barking perros, and lonely bus shelters. By mid afternoon the heat sent us looking for shade and later a cool off in the pool.

Water laying under the Atacama desert has a high salt content. Here and there it rises to the surface in the form of small lagunas.

We reached Laguna Batinache after a 40 km drive on rough gravel washboard. Tucked perfectly into the dry brown desert were 7 small lagunas, a brilliant white crust of salt surrounding the shimmering turquoise water.

We were allowed to float in two of the pools. Donning our suits, we crunched across thick grains of white salt, sat down on the hard crystallized edge and then slid in to cold, clear water. Way below, white salt caverns and precipices were visible.

The high salt content provides an unexpected buoyancy. It felt like sitting on a beach ball. Our arms and legs floated way up in the air, making us look ridiculous, but it was fun. When we paid at the entrance gate we were told we could use showers after swimming. Why? Well, once the sun drys your skin, you are covered in a white layer of salt. It didn’t brush off. And our bathing suits became stiff, making it uncomfortable to walk. Haha.

Star observation in the desert is popular. The low population density means there is less interfering light. And there are few trees or buildings to block your line of sight.

Lucky for us we met Margarita who lives in a big old bus at the back of the campground. Originally from Russia, she had studied astrophysics, and now runs an evening experience with the stars. There were 11 of us, just out in the desert with 2 telescopes, and a table of snacks and drinks. It was so dark I worried I would knock something over.

Using a laser, Margarita pointed out some constellations that we could see with our naked eye. Some we already knew like Taurus, and some we didn’t know like the Triangulum. In the Southern Hemisphere, these star formations are all upside down!

Taking turns at the telescopes, we peered at clusters of new stars, a portion of the seven sisters known as Pleiades, Orion’s Nebula and the filamentous Tarantula Nebula. Fascinating.

So much to learn. So little retained.

Bolivia has been on our mind since Peru. We had planned to enter Bolivia from there, then come in to Chile. But we had changed plans due to political unrest in Bolivia.

It was our good fortune then that San Pedro de Atacama is very close to the Bolivian border. Even better, it is close to the Salar de Uyuni, pretty much the main reason we would travel to Bolivia. We could drive directly east from here, or go south into Argentina over a high pass, then north on 40. The downsides of driving Vanna were that she would be covered in salt, the shortest road was not an easy drive, and then there was the problem of getting gas. Many overlanders carry spare cans of gas. Vanna does not.

So after hours of discussion with Sue and Ray, we decided on a 4 day tour. It was a good price at 137000 Chilean peso per person ( $240 Cdn) for 3 meals a day, transportation and accommodations. A bonus was that Ray and Bob could relax and watch the scenery. Leaving our vehicles parked in their camp spots, we packed some bags, and a van picked us up about 7 AM on Friday morning. Easy peasy.

Or so we thought.

It was a tough trip. Virtually the only vehicles on what is known as the Lagunas Route are Toyota Land Cruisers transporting tourists between the Chilean border and the town of Uyuni, Bolivia.

Driving on tracks through the desert, we bounced and rattled over the bumps and swerved through the soft sand.  Dust seeped into the vehicle assaulting our nostrils, the altitude made us dizzy and the direct sun burned our skin.

Fortunately, the scenery was incredible. And spending a morning on the Salar de Uyuni made it all worthwhile. More about the trip on the next blog.

Monday at about noon we crossed the border back into Chile and a transport van returned us to Andes Nomads Camp. We were happy to be back. While we were away, New Zealanders Tanya and Paul had decorated our campsite for Christmas and had watched over the vehicles. Not that it is a dangerous place, but it felt good to have someone there.

Tanya had also been busy planning. The Christmas dinner for 8 had expanded. There were now 16 including Bob and I, Ray and Sue, Paul and Tanya from NZ, David and Alex from Switzerland, a family with 4 kids from Switzerland, and Americans Kim and Don whom we had met in Arequipa. So it will be kabobs on the charcoal grill, salads, veggies and trifle. Ice cream if we can find it.

A very Merry Christmas to all of you!