We had a great time travelling with Brett. He is enamoured with anything that moves, like birds or lizards, and most things that grow. Trees, flowers or cacti. He loves food and volcanos. His list of “want to see” was “everything”.

But Chile’s weird geographical profile makes it difficult to find a circuitous route. This skinny chile pepper of a country has one main highway running north south. Take any road east or west and pretty soon you have to return to route 5 again, often returning by the same road. In the end, we decided to visit a few places north of Santiago and then head south of the capital to a national park and to a popular canyon.

From the coastal city of Serena we headed east to Vicuña in the Elqui Valley, camping at an estate belonging to a man named Marcos.

Eight hectares of grapes surrounded a shady garden of fruit trees and flowers. Brett set the tent up under a pomegranate tree. How cool is that? Unfortunately not ripe.

Marcos’s other hobby entails the galaxy. He had built a dome shaped theatre, and held an evening show. People from town started arriving and we were all given a set of 3D glasses. I was so mesmerized by the shapes caused by galactic explosions floating off the screen and above our heads that I paid no attention to the speaker. So I didn’t learn much. But listening to sounds from the sun was fascinating. Marcos captures these on a home made radiotelescope. In case you haven’t heard the sun lately,  it sounds like loud grunts and grinds.

A world heritage site, Valparaíso is a coastal city with a lot of charm. Not wanting to drive those narrow streets though, we camped in the small town of San Francisco de la Limache. It was a good choice because although the camp was almost full, we managed to get a site under a large shade tree.

The bus stop was just outside the camp gate. For 300 pesos we caught the autobus to the metro, and a 1-hour ride on the train took us right into the port of Valparaiso. Easy peasy.

Built on a series of hills called cerros, Valparaíso has a unique system of outdoor elevators for transporting people from top to bottom. We ambled through cobblestone streets with houses painted in blue, pink and yellow, climbed many stairs and took a ride on one of those elevators.

The historical neighbourhood of Cerró Alegre was full of art, restaurants and gallery shops. Inside, we ogled over original pieces made by the artist who run their own shops.  Photography on canvas, dresses and handbags, jewelry, watercolours, ceramics.

Outside, we loved the colourful street art. It flowed over cement walls, sides of houses, covered poles and doorways. Political or whimsical, brilliantly colourful.

Brett bought a handmade daypack, purple and green. We laughed cause it matched his shoes.

After Valparaiso we headed into the interior. This necessitated a drive right through Santiago, but with 3 lanes going one way we breezed by in an hour. The capital city is surrounded by mountain peaks and valleys full of vineyards and orchards, with the odd corn field thrown in. Wineries abound. A type of wine made here is Carmener, in between a cab sav and a merlot. Light red, it is very nice.

Leaving route 5 at Molina, we headed east into Reserva Nacional Siete Tazas, (7 cups), a forested park with plenty of clear gushing off the mountain. Many types of trees including cypress and bamboo. Camp sites were full of tents strung all along the river. It was hot and in the evenings we sat in the cold rocky stream to cool off.

A hike through the forest took us along a series of waterfalls, each flowing into a rock cup and then cascading down to the next.

After a scramble over large boulders we came to the seventh pool where swimming was allowed.

White water spewed off the cliff above, dropping into a jade green pool. The water was icy. The sun blazing hot. It was a nice combination.

On our final two days we drove up the Camino El Volcán, just south of Santiago.

The paved road winds up the canyon and on this weekend was heavy with traffic. Villages, hotels, campgrounds, restaurants and dozens of empanada stands. When the pavement ran out we climbed higher and higher on a hard packed track locally known as ripo. Not a tree in sight, just rugged rock and dark grey shale, snow pockets under sharp peaks, a thick white glacier hugging a high ridge, and finally the imposing San José de Maipo volcano.

After a steep pitch we had to stop and let Vanna cool down. But the scenery was worth the drive.

At the dead end of the road were the Colina termales. Problem being that it was already 30 C outside. The termales were above the parking lot and we could see a lot of people up there already.  What the heck, we might as well stop for a dip. 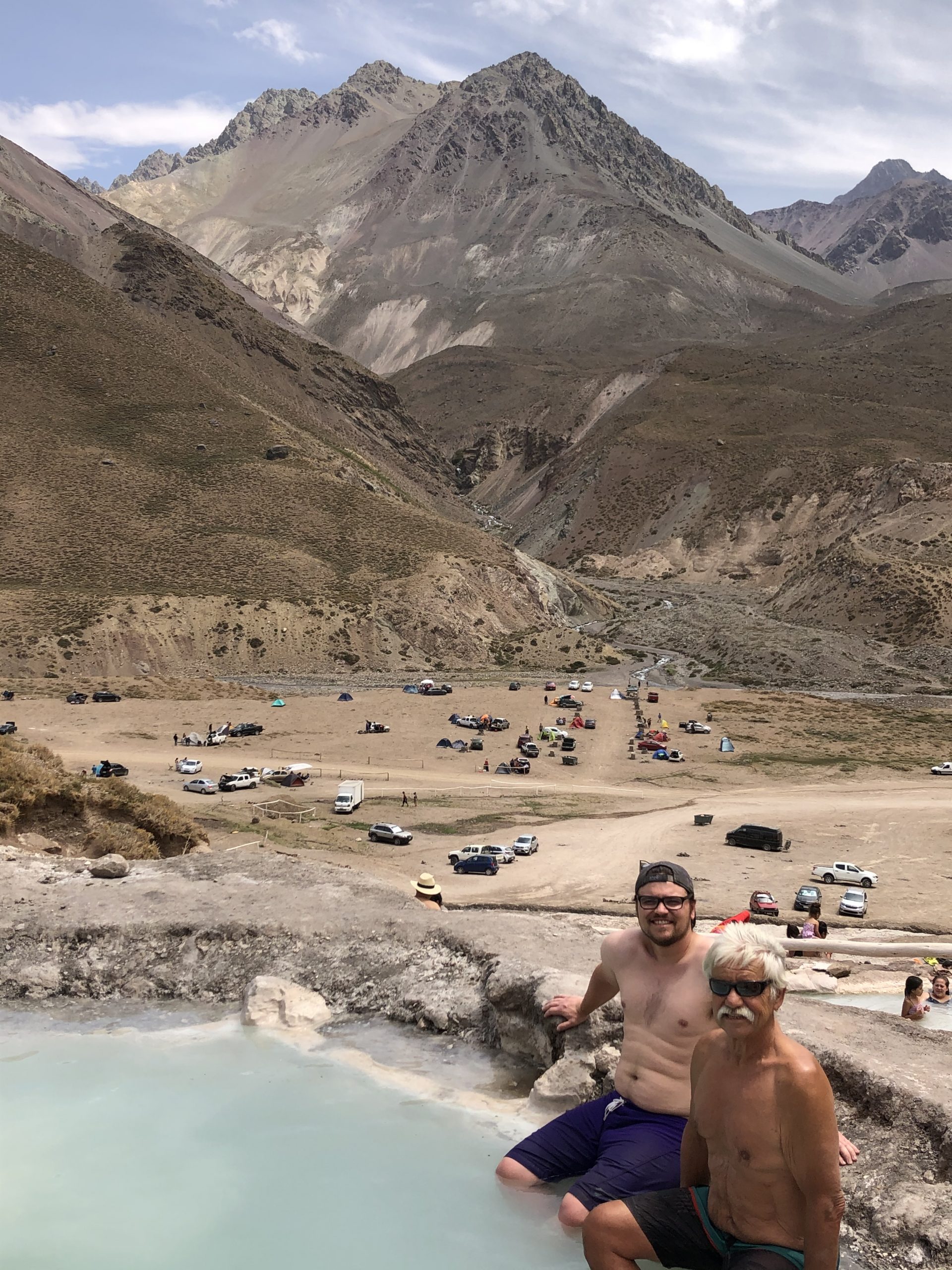 There were six rustic pools, the highest one was the hottest at 60C. No one was in it. But Brett wanted a photo. So he stood in that scorching water for about 30 seconds. His legs turned bright pink. They were still pink when we arrived back in camp over an hour later.

Sometimes for fun, we stopped to check out a roadside food stall, not always knowing what they were selling. One turned out to be sweet coconut pastries. Can’t go wrong with those. Another afternoon, we purchased Mote, which turned out to be a honey infused liquid poured over small skinned peaches, with an inch of  pearl barley in the bottom.  Served in a glass with a spoon. Who came up with that recipe? Bob liked it.

And of course, we ate empanadas. Baked in an adobe oven they smelled great. The dough is over generous but the fillings are tasty. Brett’s had tender roast beef and cheese, Bob and I had goat cheese with olives and basil.

Alas, on Sunday we returned to Santiago for Brett’s return flight to Toronto.

Sad to see you go buddy!

3 Replies to “North and south of Santiago, Chile”