The City of Temuco, on route 5, is the jumping off point into the Araucania region. We shopped there for groceries, and searched out an auto parts store. The rear view mirror had fallen right off the windshield. Wierd. Anyway, we were able to buy a repair kit and it went back on easy enough.

We decided to stay in Pucón, just east of Temuco on route 5. A mountain resort town, Pucón is full of chalet styled accommodation, restaurants and adventure tour companies.

Perched on the edge of Lago Villarrica, it attracts thousands to the beach each day in the summer. The black sand beach was crowded with Chileans on summer vacation. Kayakers, sail boats and seadoos in the lake, and paragliders over it.

Our campground was open and spacious with lots of mature trees. No designated sites. Just find a table, park beside it and make yourself at home. On the weekend there were at least a hundred tents, one trailer. And us, the Canadians in the black van.

The campground was steps from the lake. The black sand was interesting, but very rough uneven grains so not pleasant in bare feet. The most prominent feature is the majestic snow covered Volcán Villarrica.  At 2800 meters, it can be seen from our campground, from the beach, and at a few spots in town.

Parque Nacional Huerquehue was recommended as a day hike. As usual the end of the road was challenging. Bob had to back up and take a run at a sandy spot going uphill, and swear at a car trying to squeeze by us when there was obviously no room. Poor Vanna, being driven like the 4×4 she was never meant to be. More scratches on her black paint.

The first parking lot was full and we headed up to the end of the road. There, a 12 year old boy was in charge of a kiosk. In Spanish, I told him that we needed parking, but it looked like they were full. He replied loudly in English. “I have space”.   His younger sister motioned for Bob to drive behind her. Indeed, hidden behind the building there were 2 large sparking spots left. We are always amazed at these kids who confidently deal with customers while running the family business, no parents in sight.

Parked beside us we met 4 young people from Santiago. They were carrying full packs as a practice for their upcoming 8 day Patagonia trek. Over the day we met up with them several times. They expressed interest in our trip. “How did you drive here from Canada?” On the Road. “There’s a road?” They encouraged us to visit Patagonia and discussed aspects of Chile versus Canada. High prices, cell phone coverage, landscape, weather.  We enjoyed their robust company.

The Los Lagos trail took about 5 hours round trip through dense forest and thick underbrush. There were a few lookouts over the blue water of Lake Tinquilco, but otherwise we just enjoyed the huge old trees, tall with broad trunks, and the forest’s aromatic smell. Kind of piney cinnamon, if you can imagine that, but in a good way. The wide path was well maintained, with logs cut for steps and hand railings. It was a steady uphill jaunt to two smaller mountain lakes. At Lago Verde some of the hikers were enjoying a swim. We had lunch, then started back.

On the return we detoured to two different waterfalls, one spilling down a flat broad rock high up and then a white gush as it bounced over boulders, turning into a stream that carried on down the mountain.

We heard many birds, calls we did not recognize, but couldn’t spot one. Although we saw evidence of the Magellanic woodpecker, similar in size to our Pileated at home.  The park protects the Araucaria tree, or monkey tree, which has a very unusual shape, as if it was parented by a cactus and a spruce.

Climbing snow covered Volcan Villarrica is a popular adrenalin pumping excursion. With a lava spitting cráter, the volcanos activity is monitored round the clock by an Observatory in Temuco. We chose Summit Chile as our guides and 2 days prior to the climb we were fitted with climbing boots, a helmet, wind jackets and pants. Our supplied backpacks contained a gas mask, an ice pick, and crampons. None of which we had ever used before.

The day of the hike I decided not to go. My knee and hip were crying from the hike to the lakes, and I worried it would be too much. It was a good decision. On his return, Bob said that for some reason the guides pushed them hard, allowing only very short breaks, and racing them past other groups. I never would have kept up.

At 6 AM Bob left camp on his bicycle to meet the group. From town they drove in a van to a ski lift, the oldest one he has ever seen, which cut off an hour of climbing. The lift did not slow down at the top, so a guide literally grabbed his arm and pulled hard, simultaneously flinging him off the chair and spinning him in a 180, so that he was out of the way, and facing down the mountain.

Like – get off the lift now!  Not a gentle start to the morning.

From there they ascended the volcano on switchbacks of rock, then snow. The scariest parts were using crampons over snow and then on ice, while the pitch got steeper and steeper. Looking down was a mistake.

At the rim, the crater is bubbly hot but the darn clouds rolled in and limited their view. At this point they wore gas masks as the sulphur fumes were bad.

The ride down was a slide in a winding snow chute, on their bum, with a piece of magic carpet to smooth the glide. They had to use their ice picks as a brake. It was so steep that in spite of growing up on a Canadian toboggan, Bobs ice pick was dug in all the way.

Having missed all that fun, or not-fun, I decided to take my first ever paraglide. For several days, we had watched Ruben give rides at the beach, and we both thought he was very professional. His take off and landings were perfect every time. 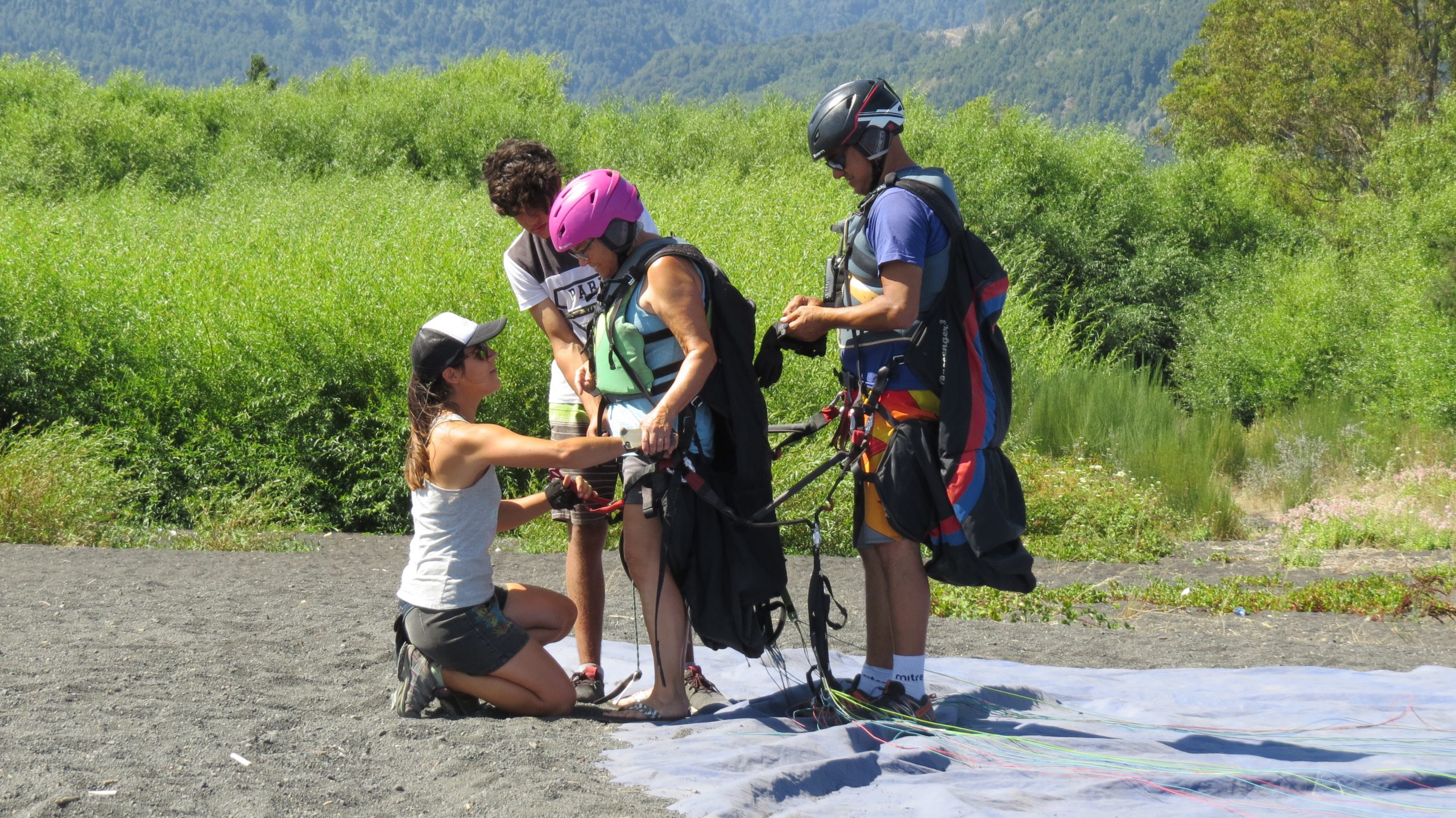 Harnessed in front of Ruben, we ran three steps and then we were in the air.  Out on the lake, a boat pulled us along until we were over 500 meters above the water. I was nervous because my guide, the guy behind me, had just said the maximum height was 500 meters, and now we were at 600.  Anxiety kicked in. Was there a problem? Why were we still going up? Yikes, I was nervous. It doesn’t take much to get nervous up there.

But Ruben kept up a monologue of explanation which helped to focus on the spectacular views. We could see most of the 173 square km of Lagos Villarrica, another lake beyond, two rivers, three volcanoes, and of course the town of Pucón and its extra long beach.

Once the boat let go, the loss of tension was noticeable. We floated.. Ruben demonstrated the steering, which was cool. And how to stall, which I did not care for. Eerie to just sit still that high up. Coming in was graceful. My guide said we would land right on my flip flops which I had kicked off just before lift off. If I had held my feet right, I could have slipped right into them as we landed.  Oh ya, I would go again.

Vanna Life:  We purchase our own parrilla.  It reminds us of the hibachi, a camping necessity when we were teenagers. Although this one folds flat, so when driving it bungies to the kitchen along with our folding table. Wonderfully delicious smells from dozens of  parrillas waft through  the campground all day.

4 Replies to “Pucón and the district of Araucania, Chile”